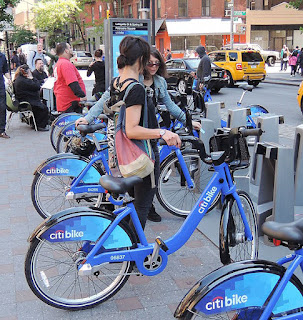 There's a crackdown on cyclists this week in New York. Police are lining up by the Citibike racks near Penn Station and along the Avenue bisected by bike lanes and grabbing red light runners. Literally grabbing them. They run alongside for a few steps and then bear hug them. I've never been given a ticket for running a red light, and I run them all the time. Not blindly, that's idiotic, but I'll stop or slow down enough to see if any cars or bikes or pedestrians are coming, and if the coast is clear I'll ride through. I'm not sure what kind of lunatic would stand and wait at a red light for no reason. Today, as as social experiment, I counted how many red lights I went through on my way to work. Seven. That's a safe average. Considering I've done that every work day for years you think I'd get caught. I haven't, but I know a lot of people who have been. One thing they all have in common? They're young women or very small men. Here's my hypothesis. Police, while they're supposed to protect and serve and all that, all have a primary objective: Self preservation. So when they're told to go out and issue tickets for something stupid, who are are they going to go after — small people who don't present much of a threat, or tall 200-pound bearded men? Now if my hypothesis is true, then I have an unfair advantage when it comes to life as a cyclist, but what should I do to level the playing field? Turn myself in to the police? Offer to pay part of the tickets of my friends? I think instead I'll try to buy cyclists who get arrested a drink. It's not much, but if all of us big cyclists try to do it, it'll snowball to the point where we definitely create at least a few small drunken cyclists.