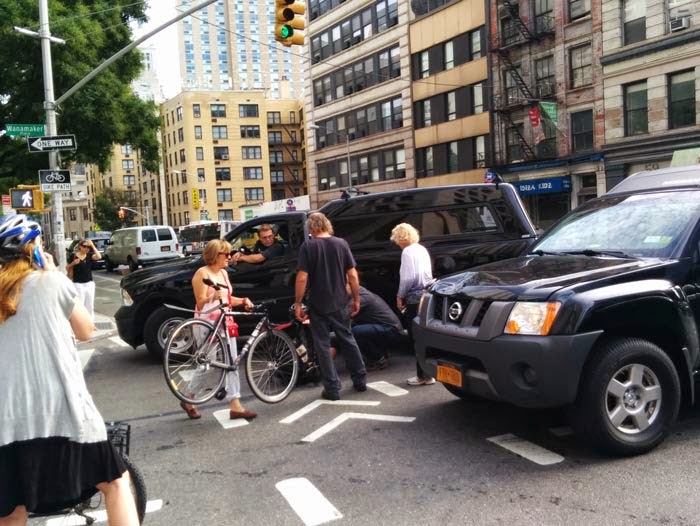 I saw an SUV hit a cyclist hit hard enough to put a helmet-sized dent in the hood last week. It was the cyclist's fault. He screamed through a red light in a packed intersection. But, in his defense, the accident wouldn't have happened if another car hadn't pulled into the bike lane and blocked it while backing into traffic. Still, the red light. If a car had run a red light and hit a cyclist, I would blame the driver regardless of the circumstances. The rider was conscious. I took a few photos to email him in case he needed them. That intersection is still a mess this week. And every day when I ride through it, I vow that I'm not going to hurry to make the next light (which is only possible if you push it off the line), and that I'll be mellow and ride slow and wait for the next light. Then today, some guy in a parking spot at that intersection pulled out and cut off a group of four cyclists who beat me off the line (because I was being so mellow, so Zen, channeling the Dude) and of course I sped up and passed the driver just so I could flick him off. He honked at me, which I appreciated since then I knew he'd seen me.