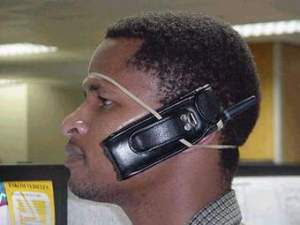 It's happened a few times that my phone will ring and the call will be coming from the person sitting right next to me. It was a popular joke when cell phones first came out, but now it means that your friend left their phone in the back of a cab, sitting on a bar, or on the chair at the local Starbucks. You answer it and the caller is some so-called Good Samaritan who's looking to return your friend's phone. It's easy if they lost it in a cab because then you can drop the driver a fat tip and he'll bring the phone directly to you, plus it's not very likely that a cab driver would steal your phone. Strangers from the street or bar are sketchy because now it's basically common courtesy to give them $10 or $20 depending on how nice your phone is, but you never know if they stole it and are calling for the reward or you were just being flaky and left your phone somewhere. Then when you get your phone back you have to thank them up and down for helping you out even though you secretly think they might have robbed you, and the first thing you do is wipe if off and see if they made any overseas phone calls so that you can be justified in your suspicions of them.