Falling Off the Chair 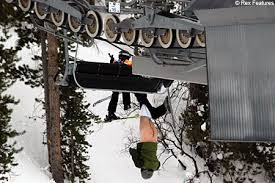 I witnessed a guy fall off a chairlift once. It wasn't over a big canyon or onto a fence, it was right where you load onto the chair. The chair swung back then forward, and the momentum sent him flying off the chair, leading with his face into the open air just beyond the loading platform. Fitness was not this man's particular obsession, and he must have fallen at least eight feet before landing on his chest. I wondered if he'd walk away and looked around to see if ski patrol was en route. The line began to pile up behind us. Instead of turning around and getting onto the next chair, the man pulled himself straight up off the ground and into the chair without his skis on. He did not turn around once to look at the crowd. A liftie had to climb down and get his skis, and then try to put them back on him while he sat on the chair. He was so high that the liftie was trying to push the skis on while standing on his tiptoes and shoving upward. It took about 5 minutes, meanwhile the crowd behind him grew. To the liftie's credit, he never once acted like a jerk or embarrassed the guy -- just fought his skis back on and effectively used the humiliation to avoid any possible lawsuits against the ski resort.