King of the Surf Guitar 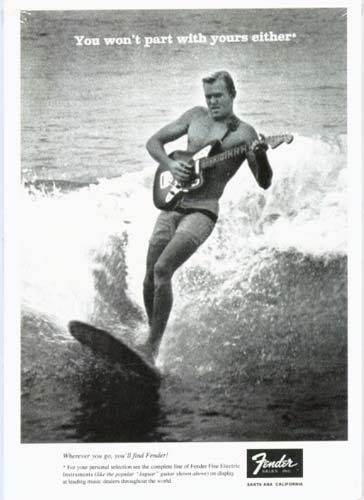 One of my friends gave me a copy of his Dick Dale two-disc Greatest Hits album before CD burning was widespread. The new technology left me with only one functional CD after I left Disc One in direct sunlight for too long, but I listened to the other disc a lot. The only things I knew about Dick Dale were that one of his songs was in the movie Pulp Fiction and that the top of my burned CD had "King of the Surf Guitar" written on it. So whenever Dick Dale would come up in conversation (which wasn't often in Minnesota) I would say, "King of the Surf Guitar" while nodding my head as if I had some special Dick Dale insight, and then I would let the other person do the rest of the talking. Friends of mine must have noticed a pattern, because after several years of this behavior one of them approached me and said, "So you know, I was listening to Dick Dale..." and I jumped in with "King of the Surf Guitar," in a confident voice, but my friend didn't keep talking. Instead he turned around and walked away; apparently he bet on the wrong side of whether I would say "King of the Surf Guitar" within 100 words after he mentioned Dick Dale's name.