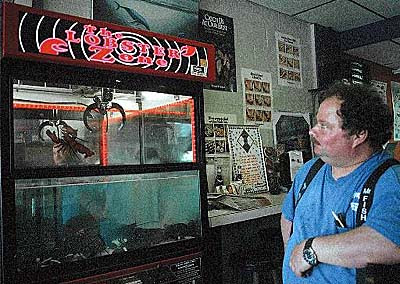 One of my friends won a free bar tab by grabbing a specially marked lobster out of a skill crane. My friend was from out of town, and the bar insisted that they didn't have to give him the bar tab. They didn't offer a specific reason, only that the lobster was erroneously marked and they wouldn't honor the bar tab bracelet worn by the crustacean. Being from out of town and having no recourse to go after the deadbeat bar isn't even the worst part of the story. My friend decided he would free the lobster in the ocean instead of eating it, but it died moments after hitting the Atlantic. To this day, I'm unsure if there's such a thing as "fresh water lobsters," but if they do exist, then this poor bastard was among their kind.