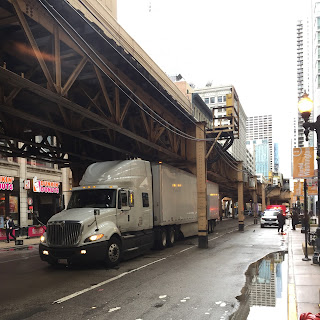 A train pulled in at evening rush hour. I walked along the open doors, picked the least-packed one and started to step in. "Really?" a guy just inside the door said to me. I paused for a fraction of a second, more surprised someone had spoken to me than anything, and then I stepped into the train. "Really!" he said. I took my left headphone out and we looked at each other. We were standing four inches apart, so it would have been hard not to look at him. "You could take your backpack off," I said. Someone packed into the other side of the train let out a bark of a laugh, which I very much appreciated, and I used that as a break to look away and put my headphone back in. At the next stop no one got off and three more people pushed their way in. I thought the guy's head was going to explode. You could tell everyone was shuffling around, checking him out of the corner of their eye to see how it would pan out. At the next stop, the guy pushed his way out and lurched across the platform. Anti-climax for sure but I'm glad I didn't get punched, or shot, which seems to happen more often these days.

Chicago is the only civilized city on Earth where no one takes their backpacks off on crowded trains, and I don't know why the CTA hasn't added a looped announcement saying, "Please be courteous and remove your backpack during rush hour."