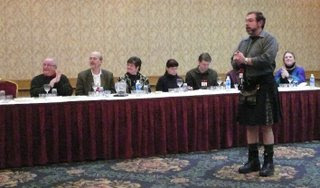 I went to a bourbon tasting last month. A liquor distributor came into a restaurant and setup six kinds of whiskey for us to try. They made the mistake of giving us all empty tasting glasses and passing the bottle around so we could pour our own .5 oz tastings. Everyone at my table topped off their glasses and the bottles were empty before making it halfway around the room. Some whiskey socialist came in to redistribute the whiskey I'd worked so hard for, but we were all still left with quite a bit of the stuff. The tasting lasted slightly over an hour. During the first 50 minutes the distributor spoke about what makes a bourbon a bourbon and he shared some stories from his years in the whiskey business. We listened respectfully. The last ten minutes was tasting time. We started with the lightest whiskey and worked our way to the strongest. Fifteen minutes later it was as if someone had turned a fire hose on the room. People were standing on their chairs yelling, the guy in charge was trying to talk, and the humidity in the small room approached a rain forest. Everyone had something to say, and instead of waiting for the other person to finish, you just tried to talk louder than them.