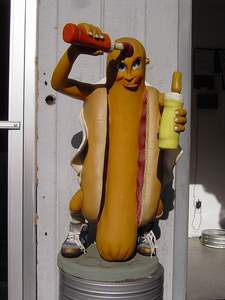 I went to a three-day basketball camp when I was in about sixth grade where coaches served us hotdogs and a 12oz soda every day for lunch. The only things I remember about the camp were the lunches because most of the hotdogs had turned a light shade of green. When we told the coaches that the hotdogs were green, they reassured us that the food was safe. They said it had turned green because there were antibiotics growing on the hotdogs. Looking back, I think it's unlikely that they knew why the hotdogs were green, but even if it was because they were growing antibiotics, I still don't think they would necessarily be safe.